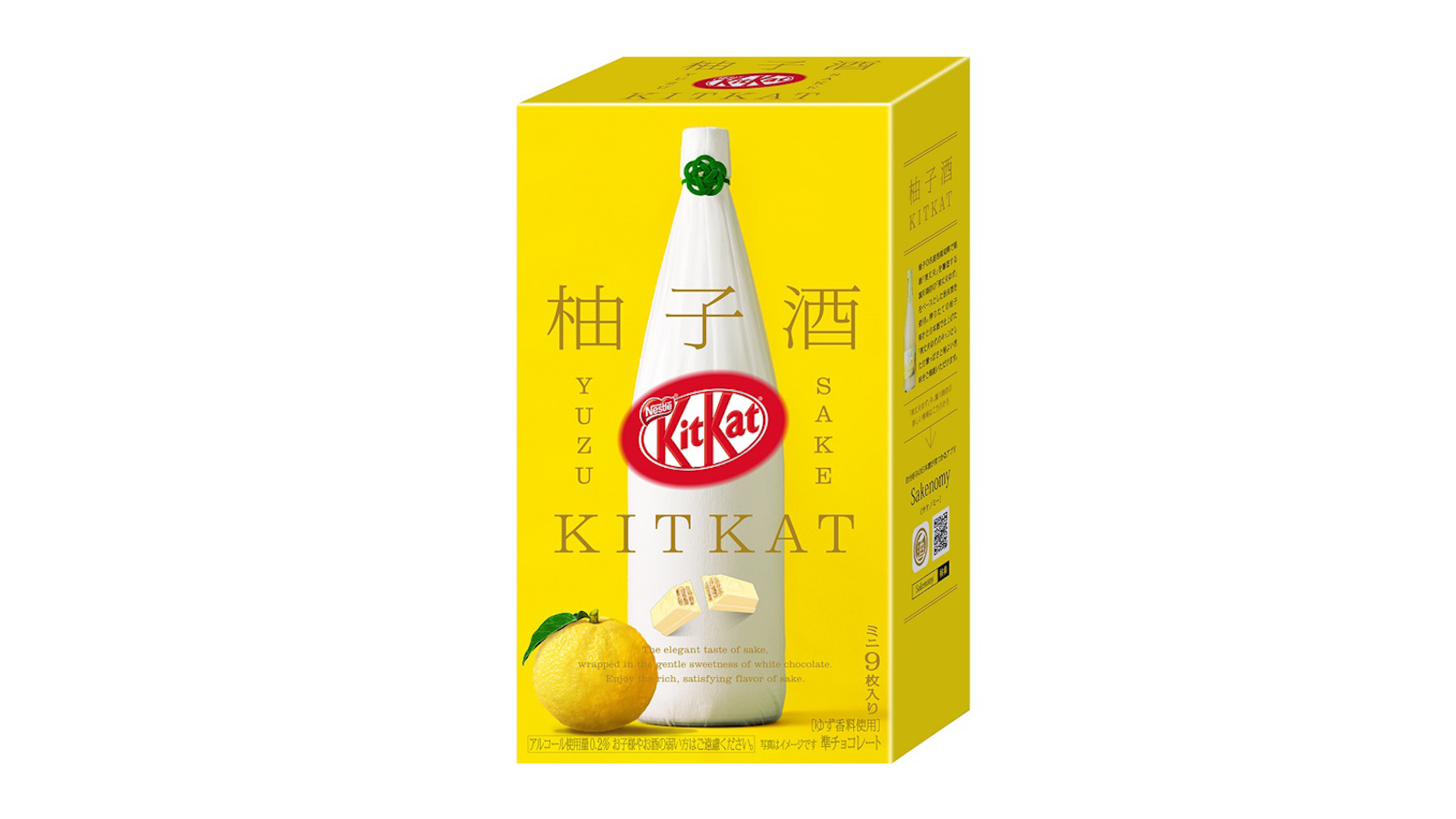 In view of further acquiring the 'inbound demand' from foreign tourists visiting Japan, Nestlé Japan Limited (headquarters: Kobe City, Hyogo Prefecture; president and CEO: Kozo Takaoka) have launched "KITKAT Yuzushu Bijofu" nationwide, which was produced under the guidance of our company president, Hidetoshi Nakata. This product yuzushu sake powder made with "Bijofu Yuzu", a famous liqueur from Kochi Prefecture's Hamakawa Shoten. In Japan, there have been over 350 seasonal and regional flavours of KITKATs, which are gaining popularity both domestically and internationally. Among these are the Japanese Sake series, which include "KITKAT Japanese Sake Masuizumi" and "KITKAT Umeshu Tsuru-Ume"*, both of which were made in collaboration with Hidetoshi Nakata, who traveled to about 400 sake breweries around the country and put his energy into activities to bring precious Japanese assets and its charm to the world. These two particular products boasted the top two sales numbers for this local souvenir series, which has around 20 types in total. These products are contributing to the promotion of Toyama and Wakayama Prefectures, where these sake breweries are located, to a wider audience.

On this occasion, what Nakata newly took note of was "Yuzu", which is gaining popularity over the world. It has refreshing scent and unique sweet-sour characteristics, and is being selected by top chefs around the world as an ingredient for gourmet dishes. A product that blends together the profound local charm of the famous liqueur "Bijofu Yuzu" of Kochi Prefecture, the largest producer of yuzu, and the well-recognized KITKAT, developed in over 100 countries worldwide, has been produced and is on sale nationwide targeting tourists as of Thursday, September 5th.

This product uses yuzushu powder with a base of "Bijofu Yuzu" liqueur, which is made with Bijofu sake and freshly squeezed juice of Kochi-grown yuzu. Enjoy the elegant balance of yuzu's refreshing tartness and subtle bitterness combined with delicately sweet white chocolate.

■ Specially designed packaging
On the vividly-colored box in yellow and green of fresh yuzu, there is a white sake bottle in the center, which has a green decorative chord on the top. This is called Mizuhiki, which is Japanese traditional art form often used when formally exchanging gifts. This specific knot called Umemusubi (plum flower knot) has the meanings of "strong bond" and "better fortune". In addition, yuzu is written in Chinese characters to appeal to foreign tourists, altogether providing a Japanese souvenir with design brimming with a high-class feel. It also takes the colour combination with the other two products in the sake series into account when lined up next to them.

■ Comments from Hidetoshi Nakata
For this third product that continues on from the Japanese sake and umeshu, we chose "Bijofu Yuzu", a yuzu liqueur made by Hamakawa Shoten of Kochi Prefecture, the largest producer of yuzu in Japan. "Bijofu Yuzu" has the characteristics of the fresh juice of locally produced yuzu and the clean taste of Japanese sake, and its demand from abroad is on the rise. You can feel the fine balance of the unique sour and bitter tastes within the sweetness of the KITKAT chocolate, and it is designed to be enjoyable for even people who have never tried yuzu liqueur before. Through "KITKAT Yuzushu Bijofu", I want to deliver these thoughts of the producers of yuzu liqueur and yuzu, as well as the charm of Kochi Prefecture, the largest producer of yuzu in Japan.

■Comments from Naoaki Hamakawa, President of Hamakawa Shoten
I feel very honored at being able to collaborate with world-famous KITKAT brand. In the early days of development, I couldn't even imagine what the combination of chocolate and yuzu would turn out like. However, when I tasted the final product, I was really able to feel the unique tartness and bitterness and refreshing taste of our "Bijofu Yuzu" in the aftertaste following the delicately sweet chocolate. In line with the boom in Japanese food and yuzu flavour abroad, I feel that yuzu liqueur has also gradually become more well-known, too. I hope that through "Nestlé KITKAT Yuzushu Bijofu" more people will learn about the charm of yuzu and yuzushu, in addition to our home, Kochi Prefecture, the number one producer of yuzu in Japan.